Best Ethereum Wallets – Ethereum! What an insane growth the coin has been. If you ask me if I prefer bitcoin or ethereum, I would choose ethereum all day. Ethereum is currently in 2nd place, actually, Ripple was ahead of ethereum but not for long, Ethereum is back in the 2nd place according to their respective market cap in CoinMarketCap. A lot of people kept asking us for the Best Ethereum Wallets after our article on the ripple wallet went pretty viral on Twitter. So here we have compiled a list of Top 5 Best Ethereum Wallet which is super safe and very easy to hold the coins.

Ethereum is an open-source, public, blockchain-based distributed computing platform and operating system featuring smart contract (scripting) functionality. It supports a modified version of Nakamoto consensus via transaction based state transitions. Along with Bitcoin, Ethereum is considered to be one of the pioneer platforms in distributed ledger and blockchain technology. In popular discourse, the term Ethereum is often used interchangeably with Ether to refer to the cryptocurrency that is generated on the Ethereum platform.

Ether is a cryptocurrency whose blockchain is generated by the Ethereum platform. Ether can be transferred between accounts and used to compensate participant mining nodes for computations performed. Ethereum provides a decentralized Turing-complete virtual machine, the Ethereum Virtual Machine (EVM), which can execute scripts using an international network of public nodes. “Gas”, an internal transaction pricing mechanism, is used to mitigate spam and allocate resources on the network. Ledger Nano S has a LED Screen in the device, which will let you know about the new transaction it has sent or received and all you can check the balance using it. Ledger Nano S is also known for supporting upcoming forks of all the respective coin. They provided Bitcoin Cash when it was forked from Bitcoin in the ratio 1:1.

It supports all the top cryptocurrencies like Bitcoin, Bitcoin Cash, Etherium, Litecoin, Ripple, Dash, Bitcoin Gold and many other altcoins, and they keep adding new coins every day. Trezor is another hardware wallet for storing your cryptocurrency. But it was the first invented hardware wallet. The reason it is placed in the 2nd place is for its price. It is pretty expensive compared to Ledger Nano S. It is priced at $99. Trezor has similar features and functionality as to ledger nano s, as they both have LED Screen and controls. They both support major cryptocurrencies and many other similar features and functionality.

It supports major cryptocurrencies such as Bitcoin, Bitcoin Cash, Litecoin, Ethereum, Ethereum Classic, ZCash, Dash Coin, Dogecoin and many other coins. It has the possibility to support all the ERC-20 Token too.

MyEtherWallet is a web wallet, exclusively built to support ethereum and other cryptocurrencies based on Ethereum. It is nowhere like the other traditional wallets. In MyEtherWallet you get to control your  Ethereum’s private key on your system.

My EtherWallet is an Open Source Web-based Wallet, only to support ERC-20 Tokens. It has an inbuilt BTC to ETH (and vice-versa) swap facility. You can also connect your Trezor or Ledger Nano S to access your funds in MyEtherWallet’s Environment. This is one of the best ethereum wallets that we recommended to our readers.

Exodus Wallet is one of those firstly invented multi-currency wallet for the cryptocurrency users to store and manage their multiple currencies or tokens from a single wallet. 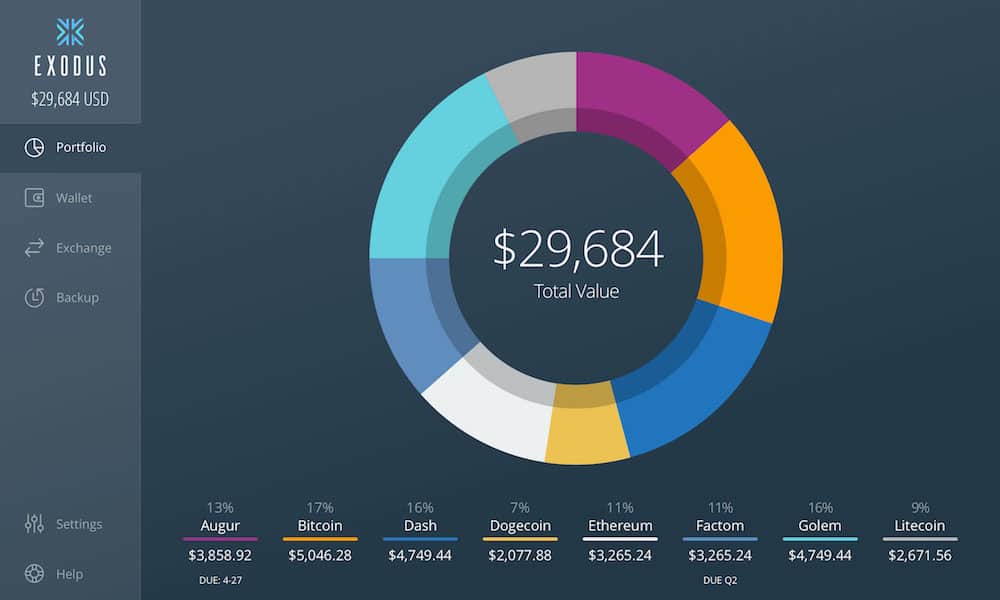 Exodus is a free software based wallet, with a great and user-friendly interface to manage the cryptocurrencies. You get a pie chart representation of your multiple currencies with the total portfolio wallet. You can exchange your currencies into others without sending your currencies to other exchanges because Exodus uses ShapeShift API which will let you exchange the currencies without transferring it. Exodus Works in Windows, Mac and Linux Operating Systems.

Jaxx is a multi cryptocurrency supporting mobile and desktop based wallet. Jaxx was developed by a Canada Based Company for the cryptomaniacs. Jaxx Supports Windows, Linux and Mac Operating System in desktop and iOS and Android in Mobile Operating System. They ask support browsers such as Chrome and Firefox in terms of Addon or Extension. Jaxx is almost similar to Exodus with supporting more cryptocurrencies. Jaxx provides you with a private key by which you can secure your wallet. Jaxx supports 20+ cryptocurrencies such as Bitcoin, Ethereum, Litecoin, Ripple and many more.

That’s it, we conclude this article here and we promise that we will keep it article updated more often by changes that take place in the crypto world. If you like this article please do share it with your friends via Social Networking sites. If you own a blog or a website please do embed our infographics on your blog or website.